This is blogpost two in a series of posts originating from the ”Re-Wilding Agile” Masterclass that I took with Dave Snowden.

In this post, I look at how we too often destroy symbiotic relationships that have emerged over time and through necessity. And how it is our vanity and ideals about “what workplaces should look like” or “how people ought to collaborate” that is the source of this.

I start this post with a story about my garden and its ladybug and aphids. I then relate my story to the work we do as coaches and managers with agile and organizations. I share examples of how managers and coaches actively make things worse. Not because of bad intentions, but because of the training we have received, and how roles are designed.

When I moved into my current house six years ago, we had hideous bushes in front of our house. Not only were they hideous, they leafed a lot which meant extra raking for me.

In our fourth year of living here, I’d had enough. I dug the bushes out and the front yard looked nicer and was much easier to manage.

Fast forward two years (to this year) and we have aphid invasions on our blackberries, rose bushes, and trees. And this is all because I removed my hideous bushes.

When I removed the bushes, I disturbed the fauna and flora that had developed over twenty years. It turned out that our bushes housed ladybugs. And if there’s one thing that ladybugs love, it’s aphids. And with our bushes gone, and the home for the ladybugs, aphids could once again rule the earth.

I tried various ways to get rid of the aphids. I used soap water, which helped, but I had to reapply it all the time. I planted new insects which you can buy, but that didn’t work. (I didn’t know that ants protect the aphids before this.) And the environment (sun+wind) was not conducive to these new insects.

Eventually, I gave up and accepted that we have aphids and I started thinking about adjacent ways to exterminate the aphids. Killing the ants was an option but fortunately I never got that far. I don’t really like to kill anything living.

On our front yard we have daisies that over the years have expanded from a few to a whole row. Usually, we let the daisies remain as long as they’re blooming and then mow them down. We keep them because they’re beautiful in the garden and indoors.

When the daisies in the garden start showing signs of decay we usually cut them down. But this year we decided to let them remain despite decaying. Truth be told we didn’t have time to manage our front yard as we’ve been focusing on our backyard this year. But for the sake of the story we can pretend that I let them remain because I was wise. 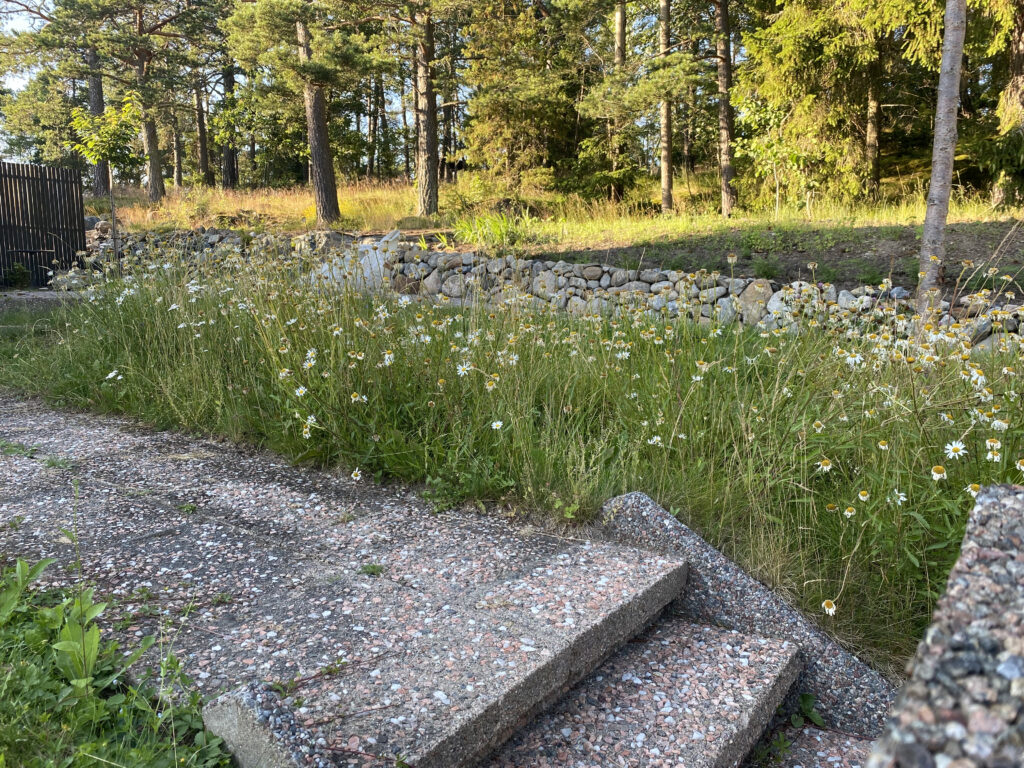 As I looked at the decaying daisies, I noticed that we had a lot of ladybugs on them. And when I looked closer, I understood why. You see, ladybugs seek shelter in high grass, bushes, and rock formations. Ladybugs also prefer to mate where there is food such as aphids and shelter close by.

The aphid invasion had spread to the daisies, so the daisies offered both shelter and food. But, and here’s the important part, the appeal of the daisies was the result of me not interfering. I.e. I didn’t groom my garden to look pixel perfect.

People do not usually don’t pay enough attention to the balance in place before they make changes. This is true whenever we try to manage something whether that’s nature or an organization.

The decay in your organizations

In nature, decay is both the output of life and the input for new life. It is the end and the beginning. In your organizations, there are a lot of things you may consider to be signs of decay that may inject and evoke life and energy. In organizations we might refer to the life evocation as ”Innovation”, ”commitment”, ”motivation” or  “sustainable performance” etc.

The point I am making here is that we must not remove decay until we fully understand the life it stimulates or restores.

Vanity gets us into trouble

There wasn’t any good way for me to anticipate that aphids would be a problem if I removed the bushes, because I had never had/seen them. The ladybugs kept them down to a minimal amount.

I removed the bushes because they didn’t fit my ideals. And people do this all the time at their companies. They see something they dislike, or they read about how another companies does things and they want to replicate that.

This happens for many reasons. Sometimes it is because people do not think of the consequences of their actions. Sometimes, it’s because feedback loops are missing. But I also think things like this happens because we haven’t learned how to properly observe a system.

Different responses to our own doings

When people get insects in their gardens, heavy weed, or anything undesirable, they respond in a few different ways. Here are five ways, that I also relate back to our workplaces.

Some replan/reform their entire yard. They bring out the digging machines, throw out the old soil, get new soil, dig out all the plants, and plant new ones.

This damages their fauna and flora beyond repair. All symbiotic relationships are permanently broken. Additionally, one cannot know if the new garden will manage balance between life and decay better than the old one.

The workplace equivalence to this is installing framework or process such as OKRs, SAFe, LeSS, or Empowered Teams.

The underlying view in such an action is that you are the master of nature. You can install a change and expect a predetermined result.

Of course, this is not how you achieve sustainable symbiosis. Rather, counter intuitively, this is how you break something beyond repair.

Another thing people do is to use pesticides, like I did. Now, I used soap and water which changes surface tension and drowns the aphids without harming the soil or plant. I want to say that this is relatively harmless because it does not hurt the plants nor soil, but it does kill the aphids.

First, examples of punishments in organizations are: not getting that bonus or salary increase, not getting promoted, or being put on a PiP.

But pesticides (punishments) do not work on things that are governed by a system. This means that if you have a system in place that promotes pests, your pesticides will not have a permanent effect as long as that system remains. This is important.

When pests are governed by a system, you have to keep applying pesticides. And as nature adapts and the strongest pests survive or get smarter, you have to use stronger and stronger pesticides over time. This goes on until the point where the soil goes so bad that it cannot maintain life. Ironically, this means that You actively spent energy on creating toxicity.

To be clear, pests refer to undesirable behaviors and pesticides is the threat and reward narrative that you establish.

A third thing that people do, which I also did, is to plant new insects hoping “they’ll take care of the problem for me”. This is the equivalent to ”hiring people with the right mindset”.

But, planting new agents will not result in a restored fauna. Additionally, in order for new agents to have an impact, there needs to be more support for them than for the present agency.

My front yard has a lot of sun and wind, and ants protecting aphids. The environment for new agents was not as supportive as the environment was for the aphids. So the majority of my agents died quickly. Only a few survived and it was not enough to make a difference this year. Perhaps in several years it may prove to have been helpful.

In organizations the “sun and wind” and “ants protecting aphids” are the culture bearers, your incentive programs, processes, and the structures in place that counter act new agents.

If you’re trying to bring in new people that you believe have a ”good mindset” but they leave within the first year or even sooner, it’s a sign that your organization is more supportive of the present agency than the new agents.

Planting new bushes and trying to restore the old system

The forth thing people can do is to replant the same bushes, or different bushes. But, with the ladybugs gone, and the ants and aphids in control, what’s to say that they won’t claim the new bushes as their kingdom?

So then you have to carefully think about what bushes to plant. Which ones that are a good match with the soil, sun and wind. And you need to find bushes that do not disturb the insect balance further. This isn’t directly easy to figure out, if entirely possible at all.

In my case, even if I do find some decent bushes, there are no guarantees that the ladybugs will once again dominate my front yard, or even that anything positive will come from it.

The equivalence to this approach in organizations is to revert from one change to the previous mode of operation. The thinking behind this is that everything will go back to how things were. But they won’t. You’ve created permanent irreversible damage to your flora and fauna, in this case people and processes.

Allowing nature to restore balance by not interfering

Lastly, what one can do is to spend time observing and understanding the processes in place. To really look at the flora and fauna and at how they interact. To look at how the landscape, plants, and life are dancing. And to not interfere. To let a new balance emerge. And actively to not get in the way of restoration processes.

This is what I eventually did with the daisies. I protected them, from myself. Or from my own vanity so to speak. Once they go really bad and ladybugs and aphids are all gone, I’ll cut off the tops. But I’ll leave the stems and surrounding grass so that my best friends have a good home.

Next year, I’ll probably plant a few bushes to see how they’re received and what balance that’s been put in place. And after that I’ll decide how to proceed.

So, counter intuitively, the way I fixed my own mistake of interfering with nature, was to not interfere with nature when it moved forward to rebalance itself to counter my first mistake.

Think about this for your own organization.

Take a moment to think about your own organization.