Two years ago I worked with a team that struggled with delivering feedback to each other. Team members would try to express something to either raise each others performance levels or to improve working relationships, but somehow something would always seem to go wrong and they ended up triggering each other. This damaged their productivity and morale to an extent that several people left the team.

The remaining team members went through feedback training and coaching, and we looked at how the intentions behind feedback are the foundation for constructing constructive feedback. For example, feedback about performance and feedback about working relationships sound very different but the members of this team always used the same format. Quite similar to when teams use user story formats for non-story related work e.g. As a system I want to not run out of memory so I don’t crash.

After feedback training, this team was even able to have very difficult conversations with each other about individual behaviors in a constructive way that strengthened their morale and productivity.

The moral of the story is that when we aren’t aware of our intention and when we do not deliberately shape feedback accordingly we risk damaging our working relationships, individuals and teams performance levels, and peoples self-esteem which is the opposite of what we’re trying to achieve. Unfortunately, my experience of working with teams has shown me that we pass on feedback in the wrong format more often than at least I’d like us to.

Below are nine common intentions that I’ve noticed that people try to pass on in the standard feedback format (“When you… I felt… And it affected me/us this way”) even though it might be a poor match.

Below is a short quiz with some common statements. Can you guess the intention behind each statement? Note that some statements can have multiple intentions. The context does matter.

If you found the quiz above difficult perhaps the model below will help you figure out what tool to use when. 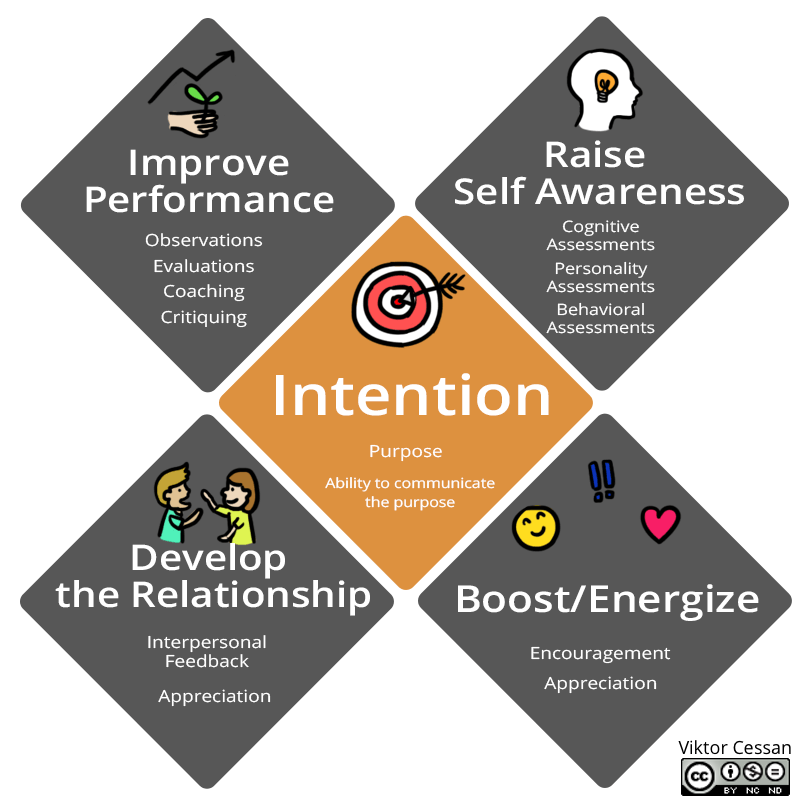 As an example, let's say one of your team members keeps interrupting you which frustrates you and you don't want to work with her. What tool would you use in that situation? Would you try to coach the person? What if she hasn't understood that this is a problem, or what if she doesn't want to be coached by you? Or would you try to appreciate her in the hopes that she understands that she should stop interrupting you? If anything it's more likely that you'll come across as passive aggressive trying to manipulate her behavior or the conversation.

Note that criticism and complaints are not listed as intentions behind feedback because I don't consider them feedback. There's nothing constructive about them.

Many with leadership training sometimes think they know how the psyche works and evaluate people from a psychological standpoint, but unless you're trained for it (psychologist) and have permission to engage someone - don't.

I hope this post was valuable to you! As always, feel free to reach out to me if you'd like to chat more about this. :)

P.s If you'd like to learn more about here are two other posts I've written about feedback.  7 Things to think about when it comes to feedback. & The importance of feedback in self managing organisations.

Subscribe to my newsletter to download my Feedback Workbook and to start giving better feedback today with the EPIQ feedback model.