Reading Time: 11 minutes
There’s lots of great material out there on how to build agile teams. That material focuses on support and improvement at a team level which is of course one crucial component. But in the midst of all this, we seem to have forgotten one of the most important aspects of team building that has a huge impact on team performance: the organizational growth strategy.

Below I’ve listed the four most common organizational growth strategies that I’ve seen across companies and industries. I’ve written out the benefits, drawbacks, and some tips on what you can do to reduce the downsides for each approach. Because there’s no organizational growth strategy that only comes with upsides, the key, as with most things, is determining which downsides you’re able to work with.

Why does having an organizational growth strategy matter so much?

You may be thinking: “why do we need an explicit organizational growth strategy?” We’re human and flexible and can adapt, right?

Constant changes in team composition require time and energy to build psychological safety back up each time a team composition change is made. This often means that the benefits of your hard work at getting the agile process down right and helping the team learn how to work well together will be greatly reduced. All that makes it even harder to become a high performing team.

Why does psychological safety matter?

Psychological safety is a state in which team members feel safe taking interpersonal risks. William Kahn, a professor in organizational behavior at Boston University, did extensive research on the topic and describes psychological safety as “being able to show and employ one’s self without fear of negative consequences of self-image, status or career.”

The level of psychological safety we feel in a given situation influences which parts of our brains get activated. When our brains have determined that the environment is socially safe, we are able to use abstract thinking, language, memories, creativity, and empathy freely and in new ways. The opposite is true when the brain registers low social safety–we go into threat response mode which means fight, flight, or freeze.

Try solving a problem when one third of the team wants to get out of the room, one third has shut down their brains so they can’t even process what they are hearing, and one third is busy finding fault and being aggressive. You’ve probably seen it before–not exactly the best environment for productive collaboration, right?

Psychological safety is considered to be one of the most important enabling factors of high performance in teams, and the way you grow teams directly affects it. That makes having an explicit organizational growth strategy all the more important. So what are four ways you can grow teams? Let’s take a look, and we start with a strategy I call “Recruitment Whac-A-Mole” which is the most common organizational growth strategy companies have. 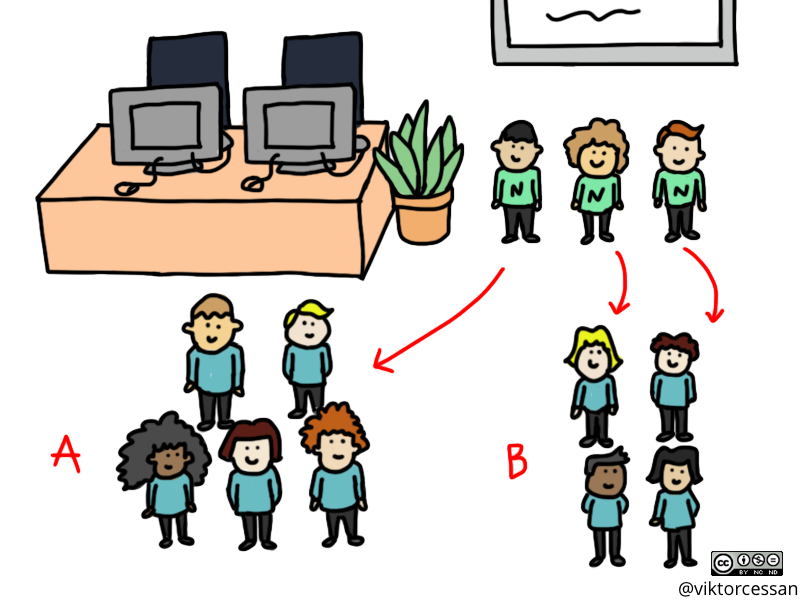 You probably remember the arcade game Whac-A-Mole in which you use a mallet to “whack” plastic “moles” as they popped up, earning a point for each successful strike. Recruitment Whac-A-mole refers to the process of opening up positions in different teams and focusing intensely on filling those positions as they “pop up”. You’re probably quite familiar with it already as it’s the most common way to grow teams.

And that’s no surprise. It’s very straightforward after all. Here’s a recruitment need that’s popped up in a team, here’s an available person that meets their requirements and that the team approves. Boom, done.

During times of high growth, open positions pop up seemingly everywhere and in every team. That leads to a whole lot of mole whac-ing. As you may have guessed, Whac-A-Mole as an organizational growth strategy comes with the most significant drawbacks both short and long term. So why do companies default to this method of team growth?

The downsides of this team growth approach are mainly related to the negative impact on psychological safety that frequent changes to team composition have, namely:

If you’re stuck in a Whac-A-Mole team growth system, here are some things you can do that will help you reduce the drawbacks mentioned above:

Mitosis Is Another Organizational Growth Strategy 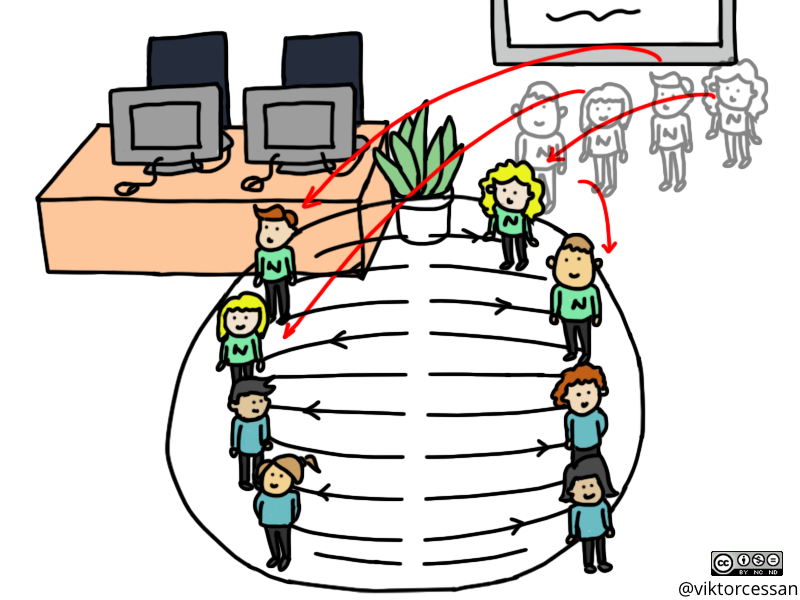 This strategy gets its name from the biological process of mitosis which is how cells divide. It starts with one stable cell growing in mass until it has the size to divide into two replicas (two stable cells). When mitosis happens at a sustainable rate, it causes minimal disruption.

I’ve helped facilitate several splits using the Mitosis approach as an organizational growth strategy. The most recent one was splitting a huge value stream to independent streams that had value to the customers but the organization didn’t know how to. We merged several teams, and, after they’d been exposed to the entire value stream for some time, we asked the teams and team members themselves how they thought they should be split.

Next Up We Have Team Progression 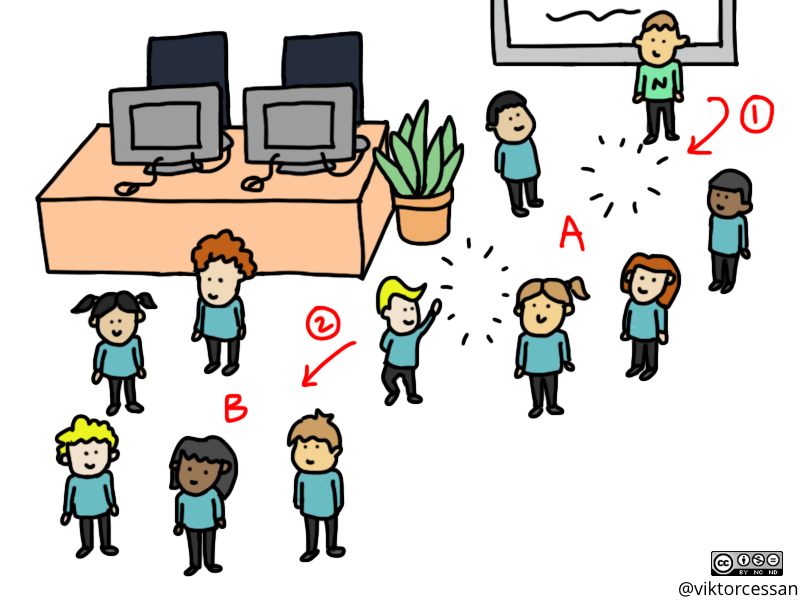 This is another organizational growth strategy. In times of hyperscaling this adds unnecessary tension but if your organization is growing slowly and organically this may create the internal movement you need to unleash creativity and knowledge sharing that bumps up everyones game.

Team Progression works as follows: new hires (always or often) start in one and the same team (A). Whenever someone joins that team, someone leaves that team to team B and someone from team B leaves for team C. Deciding who moves once someone new joins can be decided through a pre-defined process or on a case-by-case basis. Both require different preparations. 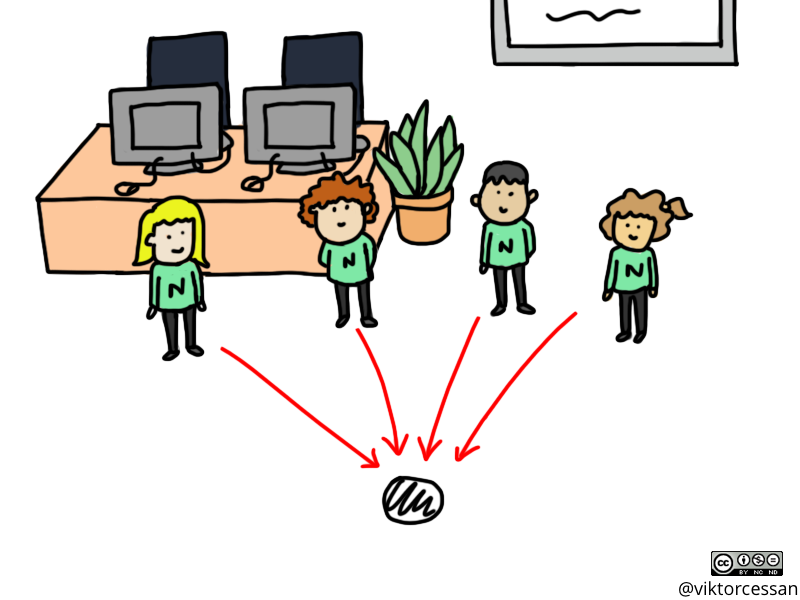 Rounding out the list is an organizational growth strategy I haven’t seen used widely but I find quite interesting and that’s worked for me in the few instances I been a part of it.

When I was a consultant at Avanza Bank in Sweden, they ran an experiment with a different approach to team growth: building entirely new teams with new joiners and have trial runs with trainees. The trainee teams received whatever support they needed in terms of coaching, facilitation, and mentoring. To some extent, this may resemble how some tech companies run bootcamps, but there are some meaningful differences: the length of time that the team stays together, for example, which in bootcamps can change from month to month as new hires get to explore new aspects of the company.

I've walked through a lot in this post, so I want to sum up my main takeaways (or the TL;DR for those of you who may have skimmed)

Is your company or organization currently scaling or planning to scale? You may be interested in my public training course Mastering Team Dynamics if so. It builds upon Bruce Tuckman's and Susan Wheelans research but has been adapted for knowledge work in a complex and rapidly changing environment and you’ll learn how to faster coach teams to high performance.