Are group development courses such as IMGD silver bullets when it comes to helping teams mature? That’s what Martin Wasielewski (also an agile coach at Spotify) and I wanted to find out.

In order to find the answer we defined an experiment, and identified a 3 day group development course called S360 encounter that we would send a (willing) development team to. Our hypothesis was that:

By increasing people’s self awareness, improving their self esteem, teaching them how to communicate effectively, and raising their understanding of other people’s needs, teams will become high performing.

How we would evaluate this experiment

Three and six months after our dev team had taken the course we would evaluate the experiment on the following:

Conclusions
The team was disbanded 1 month after they had completed the course and instead 2 new teams were created partially with new team members. This was the result of changed company priorities and we decided to do our 6 month followup after 1 month.

After 1 month we could not observe any noticeable changes in the teams cycle time, velocity, or in the no. of defects released to production. But the team reported some significant changes in their own and peers behaviour, as well as in how they communicated and collaborated: 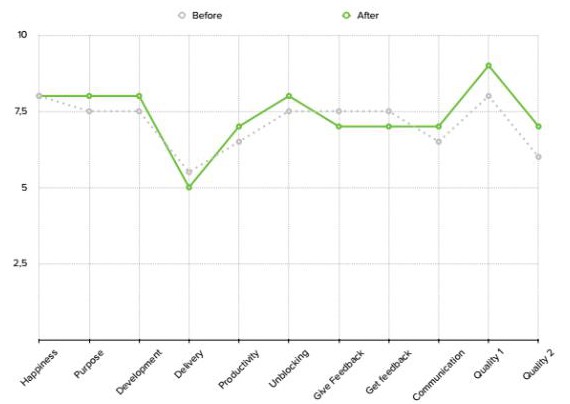 Our survey showed a slight positive trend but in the whole it was insignificant.

Based on the shortness of this experiment we were unable to conclude if the S360 encounter develops a team to high performance or not. The only thing we could conclude was that teams that do not collaborate, that have a low exchange of feedback between the team members, and that lack healthy conflict in discussions benefit from the S360 encounter.